The University of Cambridge is the 3rd oldest university in the world. Only Oxford University and The Sorbonne, in Paris are older.

Cambridge is one of the few academic institutions in the world that should be familiar to most people, not just its alumni, students or members of the academic community.

The University of Cambridge is rivalled by only a select few, competing for and attracting the finest and most gifted students and academics from all over the world, who wish to study or work at one of the world’s most venerable academic institutions.

Founded in 1209, Cambridge is one of the oldest existing universities today, with alumni including the likes of influential figures such as

Its famous courts and halls have been the subject of many fabled stories that continue to be of interest to this day, as well as featuring in or inspiring numerous films and television programmes.

It is therefore no wonder that Cambridge University is attractive not only to prospective students, but also to visitors and locals alike, who want to soak up the atmosphere of this prestigious institution.

It’s easy to understand why, if you have ever spent any time wandering the narrow lanes and cobbled streets of this medieval city.

The university is located in the city of the same name in Cambridgeshire, England.

As Cambridge is a collegiate university, there is no Cambridge University campus, per se. The  answer to the oft asked question of ‘where is the University?’ would usually be ‘all around you!’

In addition to the numerous colleges that are spread all around the city, there are also various different faculties and campuses belonging to the University all around Cambridge.

You could almost argue that the whole of the city of Cambridge is part of Cambridge University campus. With a large amount of the land in the city being owned by the colleges, this wouldn’t be a million miles from the truth.

Life in the city centre is very focussed on the existence of the university and it’s hard to imagine what the city would be like without it.

For residents, life in Cambridge is relatively laid-back: images of cattle grazing not too far from the city centre, cyclists, and quaint coffee shops come to mind.

The iconic image of King’s College Chapel standing near the banks of the River Cam is already a staple among tourists when they describe the city and even amongst those who have never set foot in the UK.

The unenlightened might dismiss the significance of Cambridge, but with the connections of the city to Cambridge university, the city itself has always played an important role in the history of the UK and the world.

Today, this city of over 130,000 people continues to play a crucial role in global affairs, especially in the spheres of science, research and technology. Cambridge is the hub of Silicon Fen, England’s version of America’s Silicon Valley and one of the most significant technology hotbeds in Europe. 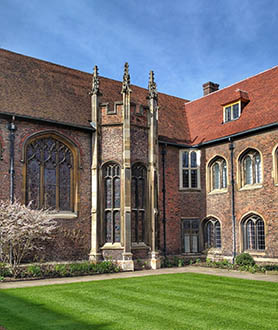 One has to visit Cambridge in order to truly appreciate the city’s historic buildings and varied architecture. A city whose buildings date from over 800 years ago, right up to the very modern, with all sorts of examples of the weird and wonderful in between.

Trite as it may sound, words will never be enough to describe life in Cambridge.

Millions of people visit the city every year in order to get a taste of the Cambridge life, most of them during summertime, when the weather tends to be better, although visitors flock to the city all year round.

The best time to visit is usually outside of term time, when students are not in residence and the Cambridge colleges are open more often to the public. Some even offer the option of accommodation to visitors to the city, in the rooms that the students have vacated for the holidays.

For a detailed map showing the location of each college, we recommend you take a look here or at the map below. This will give you an idea of the size and scope of the university and how intertwined it is with the fabric of the city itself.